The intro and outro music for the Washington episodes unless otherwise stated is from “Hail, Columbia” as performed by the US Navy Band. The full recording can be found at Wikipedia. The song was originally called “The President’s March” and was composed for Washington’s first inaugural. More information about the history of “Hail, Columbia” can be found at Wikipedia. 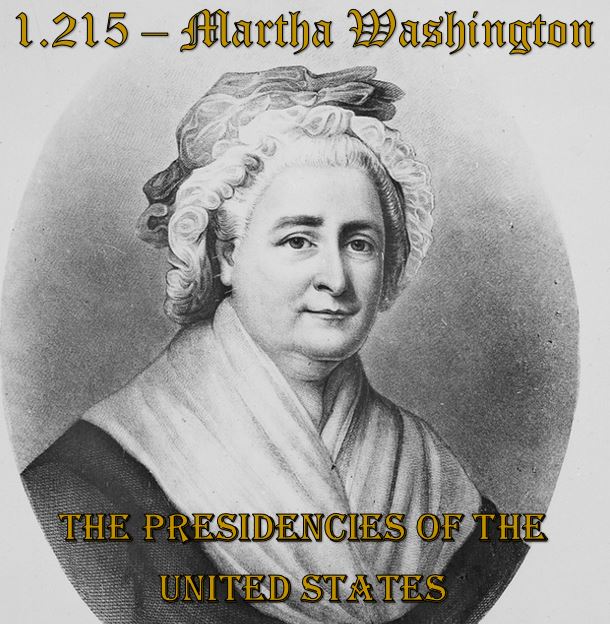 Year(s) Discussed: 1731-1802 In this special episode, we take a closer look at Martha Washington, the woman who would serve as the nation’s first First Lady before the term was even crafted for the role. To help us better understand her life and her role in American history, I am joined in this episode by Presidential and First Ladies historian Feather Schwartz Foster who shares her knowledge and insights about Martha’s strengths and shortcomings, the Washingtons’ marriage, how Martha approached her public and household duties after her husband took the oath of office in 1789, and what impact Martha had on crafting the role of the First Lady. 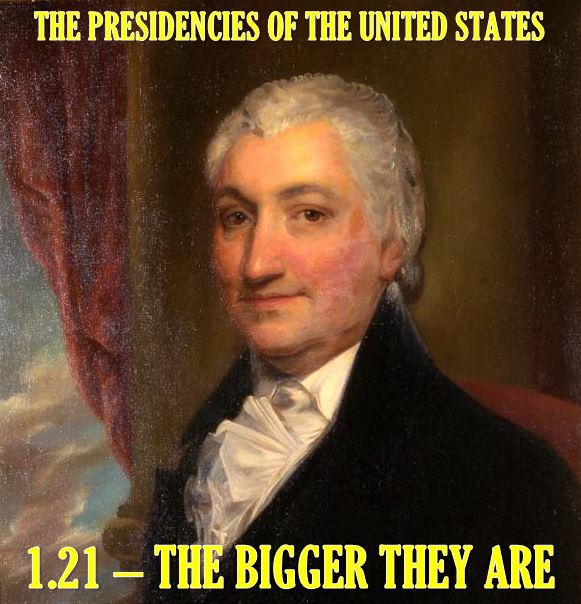 Year(s) Discussed: 1792-1794 The Washington administration is beset by various problems in the west while the British threaten American shipping interests in the West Indies, leading the two nations on the path to war. Though growing ever more tired of his position, President Washington must devise a plan to thwart attempts at rebellion in the west, decide upon an envoy to send east to London to seek out a diplomatic resolution, and begin work to build the US Navy. No rest for a weary President in 1794! 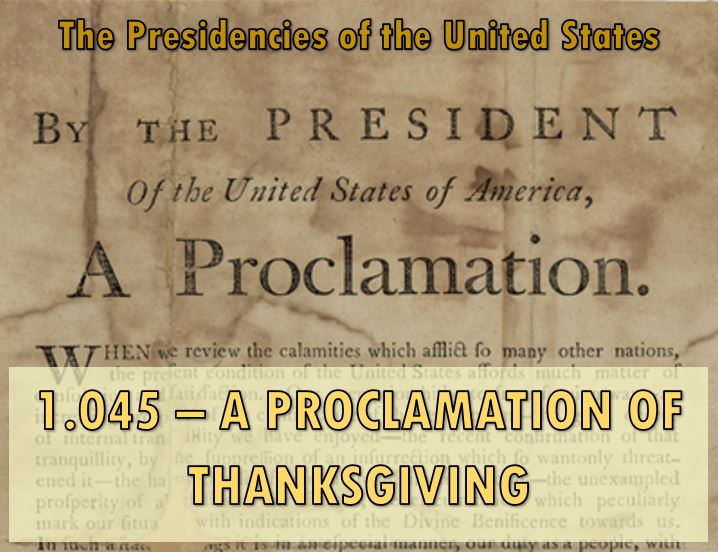 1.045 – A Proclamation of Thanksgiving

Year(s) Discussed: 1619, 1621, 1789 To mark the upcoming US holiday of Thanksgiving, I wanted to release this special episode to provide a few thoughts on the holiday and its history and legacy as well as share with you President Washington’s proclamation issued on October 3rd, 1789 calling for the first day of national Thanksgiving under the constitutional government. 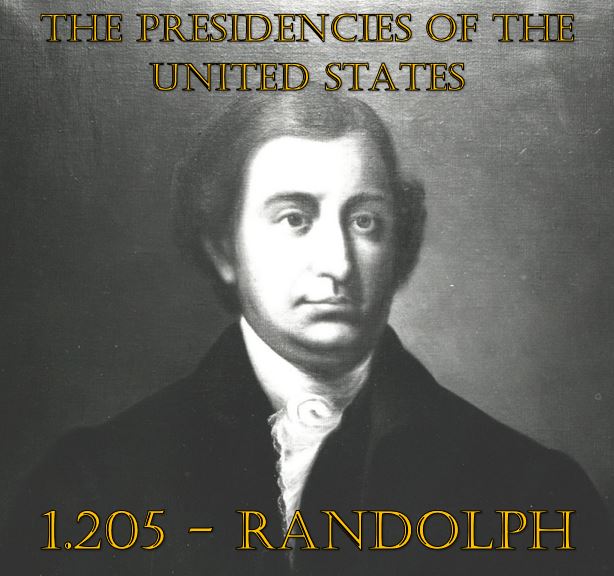 Year(s) Discussed: 1753-1789 Though well known in his own day, Thomas Jefferson’s successor at the State Department is little known to modern audiences. Thus, I present this special episode in order to help you understand our second Secretary of State. His name has been brought up in the podcast previously as he was the first Attorney General, but there are a few key points that you’ll want to pay attention to about this Virginian’s story as they might just come to play in the not too distant future. 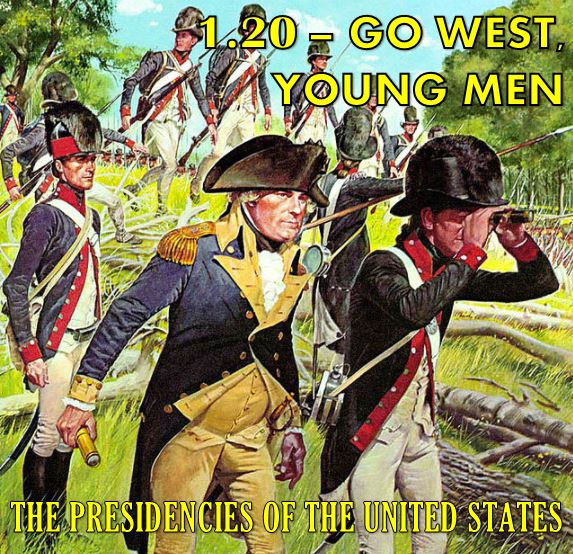 Year(s) Discussed: 1792-1794 Washington and his administration adjusts to the shake-up following Jefferson’s departure from the Cabinet. Meanwhile, attention is turned west due to General Wayne making steps to take his Legion of the United States into action as an attempt at negotiation with native forces fails in part because of British interference. The federal government must also decide how to approach an increased uproar coming from western Pennsylvania over the whiskey excise tax. Though Secretary of the Treasury Hamilton has to devote a good portion of his time in the first part of 1794 to defending his record, this doesn’t stop him from meddling in affairs with other parts of the government. 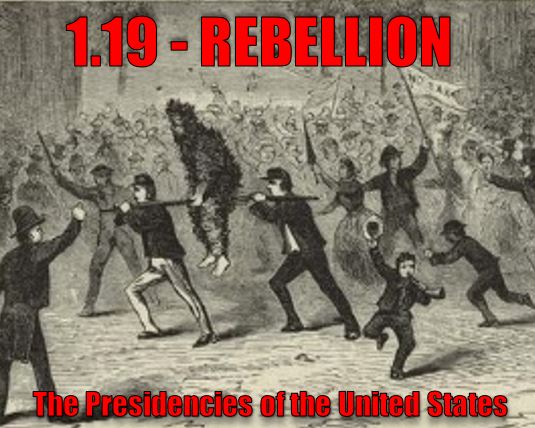 Year(s) Discussed: 1791-1794 As Washington sets wheels in motion for some rather radical changes to his personal way of life, others at home and abroad start working towards some changes of their own. In western Pennsylvania, small-scale distillers and farmers begin to organize against a new federal tax that would impact them more detrimentally than it would larger operations. In France, as the new French Republic faces food shortages and military setbacks, crowds start agitating for new, more effective leadership. Back in Philadelphia, Secretary of State Jefferson begins packing his bags and wrapping up his work as he counts down to the day set for his departure from the Washington administration. The old status quo seems forever gone as the year 1794 comes roaring in like a lion. 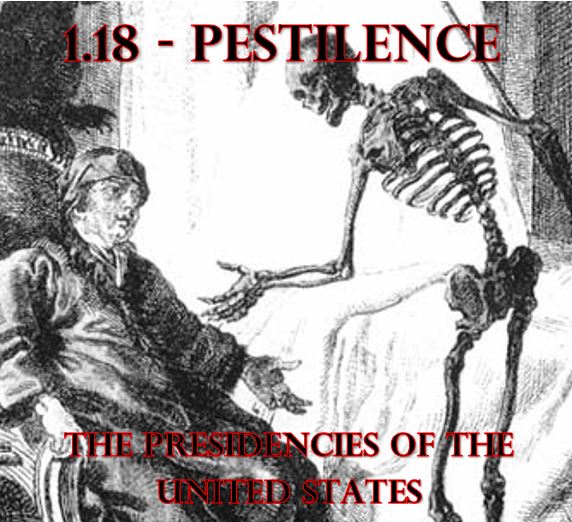 Year(s) Discussed: 1786-1793 Washington, his household, and his administration struggle to deal with an epidemic of yellow fever as it makes its way through the city of Philadelphia, indiscriminately infecting people from all walks of life including a resident at the President’s House. In addition to the loss of life, the epidemic brings up questions about how best to utilize medical knowledge to the public good, the role of the press, the relationship of individuals to their environment, and the ability and role of the government in a crisis management situation. 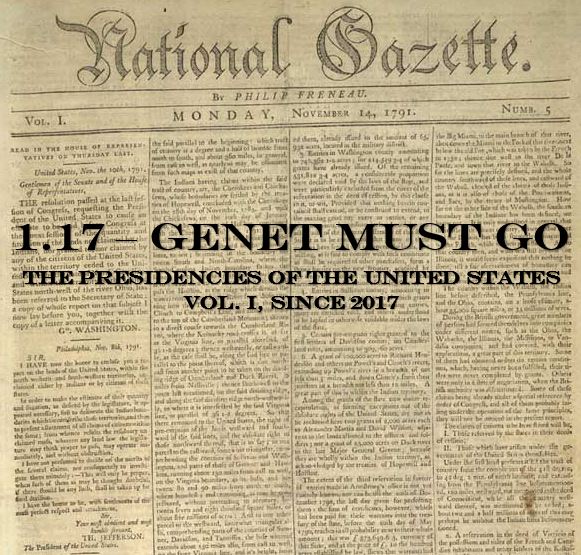 Year(s) Discussed: 1793 Washington returns to Philadelphia to deal with the continued agitations of French Minister Genêt. Meanwhile, Attorney General Randolph goes south on a fact-finding mission, Philip Freneau continues his attacks against Washington and his administration in the pages of the National Gazette, and events continue to unfold in Europe which have ramifications across the pond. Through all of this, the President has to decide what to do with his partisan Cabinet and how to preserve neutrality without offending either Britain or France. 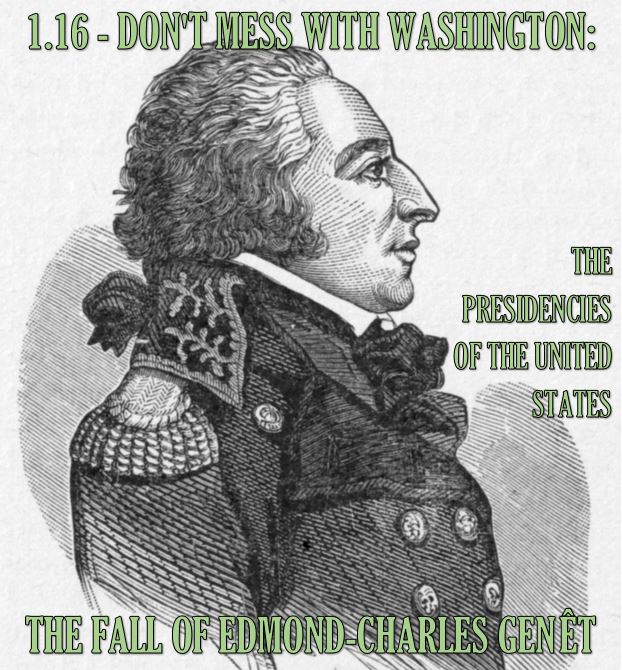 Year(s) Discussed: 1793 The new French Minister to the US arrives in Philadelphia and begins causing a stir both within the Washington administration and out in the streets. Meanwhile, Washington has another bout of ill health but recovers just in time to have to rush back to Mount Vernon despite being in the midst of diplomatic tensions. Party politics are taken to the next level with partisans beginning to organize their efforts just as both Jefferson and Hamilton contemplate their respective exits from the Cabinet to be free to pursue their own aims. 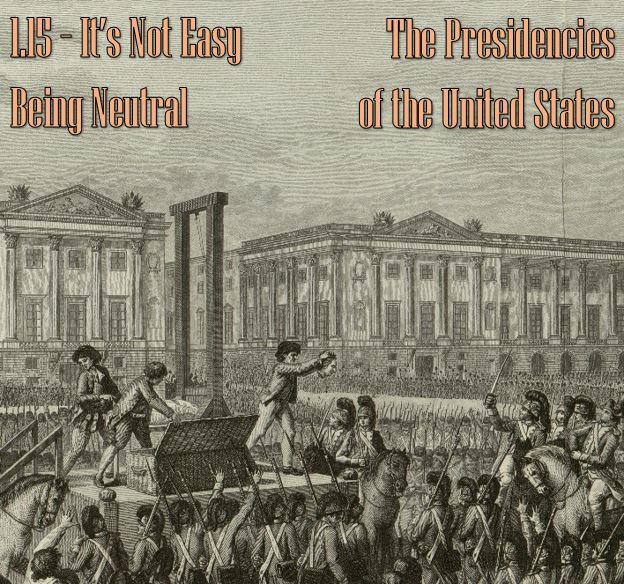 Year(s) Discussed: 1791-1793 The British and French are at war, and the Washington administration is caught in the middle. Though the US government had established a Treaty of Alliance with the French back in the Revolutionary War, the administration had to question whether the new French republican government was in fact valid and whether the US was still bound by the treaty made with the government of the recently executed Louis XVI. However, they are given little time to consider the situation as French ships start capturing British vessels off the coast of North America and bringing them into Philadelphia harbor. Washington wants to stay out of it, but will the European powers force his hand? 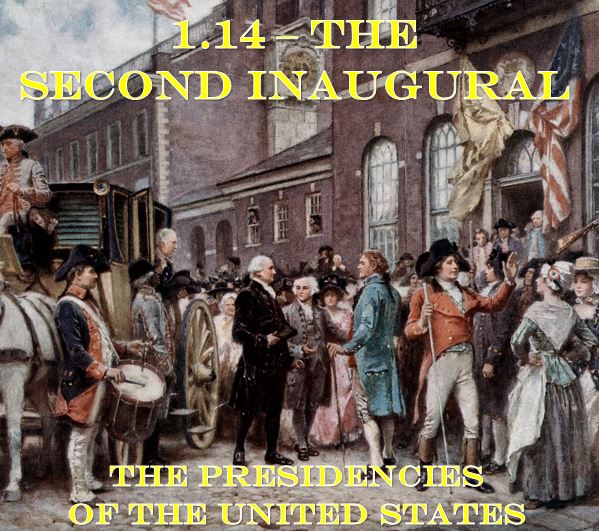 Year(s) Discussed: 1791-1793 The lead up to Washington’s second inaugural ended up being much more dramatic than anyone could have imagined as personal conflicts threatened the construction of the Federal City, Hamilton’s affair with Maria Reynolds threatened to be made public knowledge, and Representative William Branch Giles filed resolutions against Hamilton accusing him of official misconduct and calling for his dismissal. In the middle of all this, a reluctant president turns to his family for support as he prepares himself for what already appears will be a more turbulent four years ahead than his first term had been. 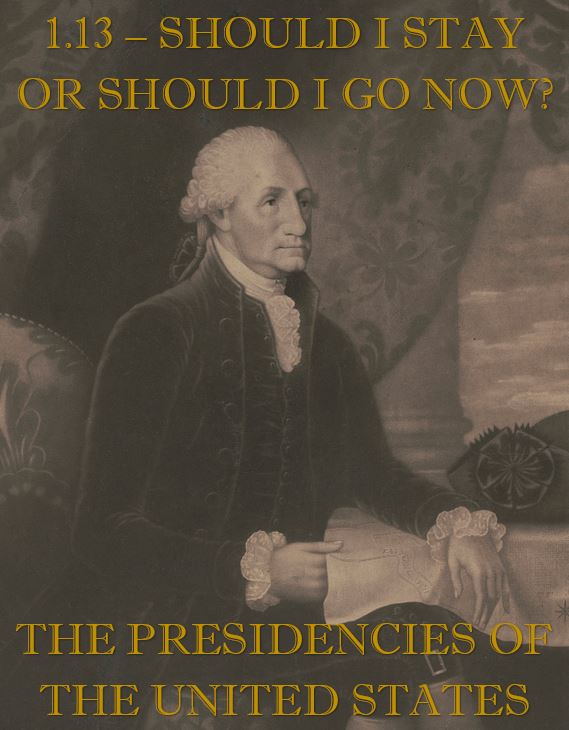 Year(s) Discussed: 1792 Washington has an important decision to make as the Election of 1792 looms. Should he accede to the wishes of many and stand for reelection or should he take his weary bones back to Mount Vernon for the remainder of his days? The growing factional agitations that were exacerbated by Hamilton’s submitting his Report on Manufactures as well as a financial panic in 1792 do little to make the situation better. Meanwhile, Hamilton’s affair with Maria Reynolds gets ever more complicated. And did the Attorney General just say something about a potential civil war? Washington’s action-packed first term hits some bumpy roads in this episode. 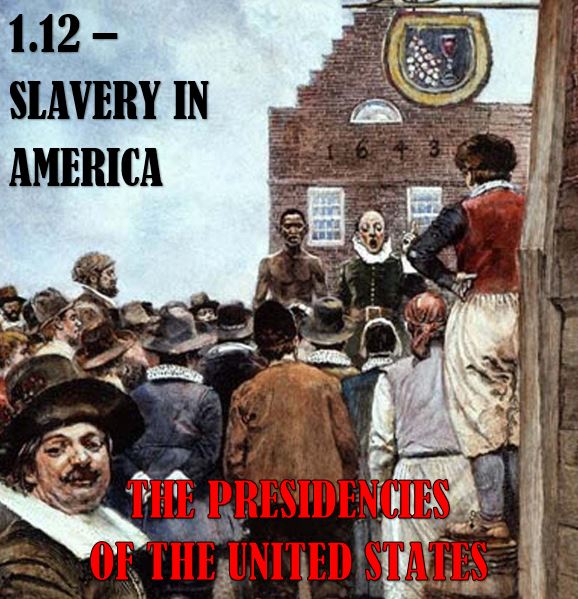 Content Note: Though not going into graphic detail, I did want to let everyone know upfront that this episode, in discussing slavery, does touch upon the violence associated with slavery including that perpetrated against female enslaved people. Year(s) Discussed: 1490s-1792 European settlers in the Western Hemisphere began practicing slavery in the lands that they found on the other side of the Atlantic in the late 15th century. In this episode, we examine the institution of slavery in what would become the United States as it developed up to the end of Washington’s first term in office. From its beginnings to its codification, we also look at some of the living conditions of enslaved peoples and early efforts to end the practice of slavery. The episode finishes off with bringing the focus back to Washington and how he approached slavery as he participated in the Constitutional Convention and then took office as president. 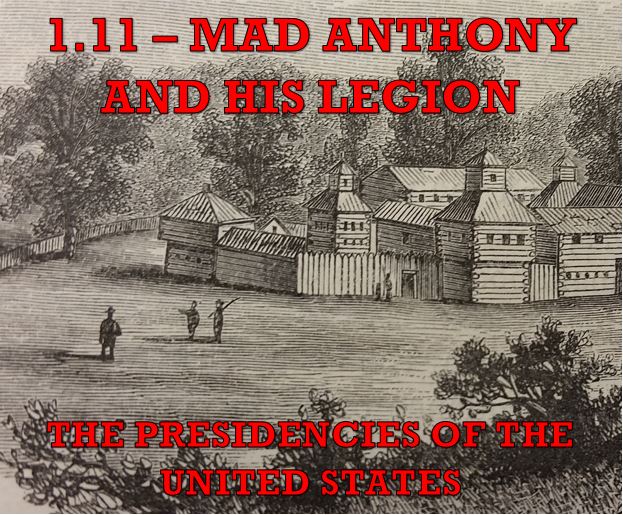 Year(s) Discussed: 1792-1793 Washington hopes that third time will be the charm as he taps Anthony Wayne, a general who had served under him in the Revolutionary War, to take command of the Army following St. Clair’s defeat and to prosecute military action against native forces in the old Northwest. Wayne, who earned the nickname of “Mad Anthony” during the war, is not necessarily what one would call a conventional officer, however. Will Washington’s gamble pay off? Meanwhile, unknown to everyone, a spy lurks in the midst of the military forces in the West and threatens the future westward expansion of the United States. 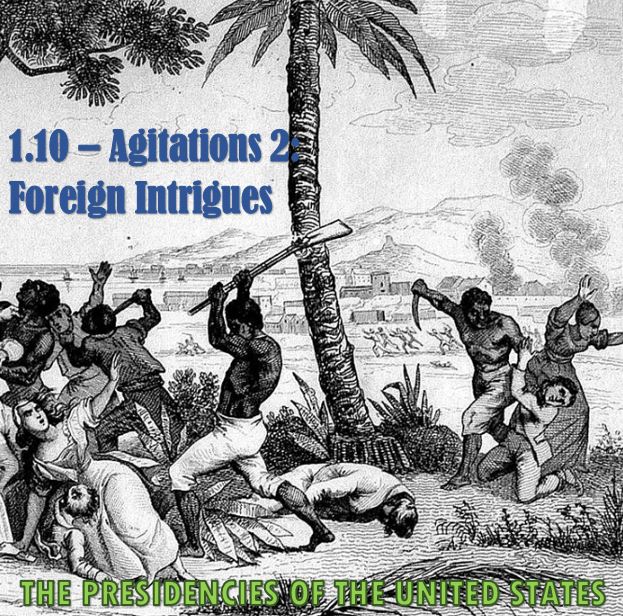 Year(s) Discussed: 1789-1792 Numerous foreign relations issues faced Washington’s first administration. In this episode, we examine how the administration dealt with the Anglo-American trade imbalance, the impact of the French Revolution, Spanish attempts to break the lands west of the Appalachians away from the US, and what would prove to be the only successful major large scale slave insurrection that occurred in the French colony of Saint-Domingue at the beginning of what we now know of as the Haitian Revolution. Hope you have your seatbelts fastened, listeners, cause early 1790s diplomacy can be a bumpy ride!