Year(s) Discussed: 1809-1810 In the wake of the failed negotiations with British Minister to the US Francis James Jackson, the Madison administration and Congress had to determine next steps to address the tensions with both Great Britain and France. Meanwhile, a new diplomat arrived from Spain as some American officials began to consider ways to secure the Floridas for the US. Sources used for this episode can be found at https://www.presidenciespodcast.com

Year(s) Discussed: 1795-1810 For fifteen years, one controversy popped up time and again to disrupt the public arena - the Yazoo Land Controversy. From newspaper essays to debates in Congress, this issue involved some of the biggest leaders of the time including Alexander Hamilton, John Randolph of Roanoke, John Quincy Adams, and James Madison. Finally, in 1810, the Supreme Court took up a case that would look to settle the matter once and for all and, in the process, set an important constitutional precedent. Sources used for this episode can be found at https://www.presidenciespodcast.com.

4.09 - Fear and Loathing in Napoleonic Europe

Year(s) Discussed: 1808-1810 Despite achieving a victory in the War of the Fifth Coalition, French Emperor Napoleon's hold on control over the European continent was looking increasingly shaky. This would make the reception received by the new US Minister to Russia John Quincy Adams a warm one as Russia was on the hunt for new allies. Meanwhile, wealthy American businessman and merchant John Jacob Astor set in motion plans to create a trading network across the globe that would also include trading posts across the North American continent including a key new settlement on the west coast. Sources used for this episode can be found at https://www.presidenciespodcast.com. 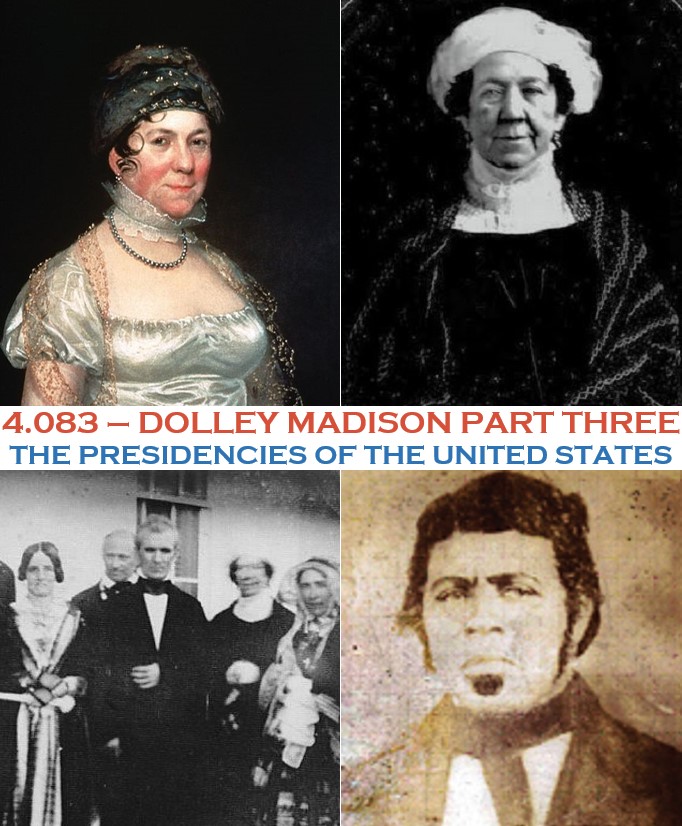 Year(s) Discussed: 1817-1858 James and Dolley Madison left Washington, DC in 1817 anticipating a peaceful retirement in Montpelier. Little did they know what life had in store for them or that Dolley would end up returning to the social circles of the leading politicians in the nation's capital. Learn more about the triumphs and tribulations faced by the former Lady Presidentress in her later years and the legacy that she left by listening to this episode. Sources used for this episode can be found at https://www.presidenciespodcast.com.

Year(s) Discussed: 1768-1849 We continue our examination of the life and legacy of Dolley Madison with a discussion with Hilarie Hicks, Senior Research Historian at James Madison's Montpelier. In this episode, we talk about Dolley's role in the social circles of the nation's capital during James's presidency, her management of the household, her views on slavery, and whether she was responsible for saving the portrait of George Washington during the British invasion of Washington, DC. More information can be found on the website at https://www.presidenciespodcast.com.

Year(s) Discussed: 1768-1809 Born in a Southern log cabin, the woman who would go on to be the center of social life in the nation's capital developed her skills of charm and entertainment through formative years filled with uncertainty, turmoil, and tragedy. Join me as I explore the early life of Dolley Payne Todd Madison up to her husband's election as the fourth President of the United States. Sources used for this episode can be found at https://www.presidenciespodcast.com.

Content Note: This episode mentions the topic of suicide. Year(s) Discussed: 1807-1810 The Madison administration experienced numerous setbacks and embarrassments in the latter part of 1809. The President's private secretary, Isaac Coles, committed an egregious breach of privilege while on official business. Around the same time, Dolley Madison's brother-in-law, Rep. John Jackson, got into an altercation with one of his colleagues in the House. Meanwhile, the administration had to find a new governor of the Louisiana Territory after the untimely demise of Meriwether Lewis. Sources used for this episode can be found at https://www.presidenciespodcast.com. 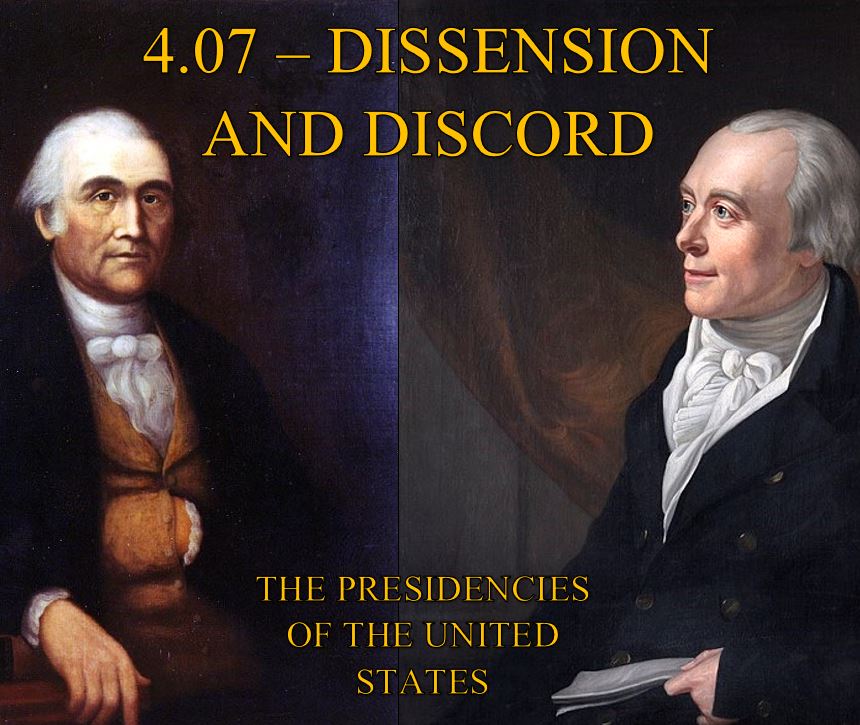 Year(s) Discussed: 1808-1809 The arrival of the new British Minister to the US, Francis James Jackson, was not necessarily seen as a good omen by the Madison administration for the prospect of healing the rift between the United States and Great Britain, and the negotiations once they started proved to be quite contentious. Meanwhile, in Europe, US Minister to France John Armstrong grew ever more frustrated with the Napoleonic government, and a new Prime Minister took office in London under less than auspicious circumstances. Sources used for this episode can be found at https://www.presidenciespodcast.com. 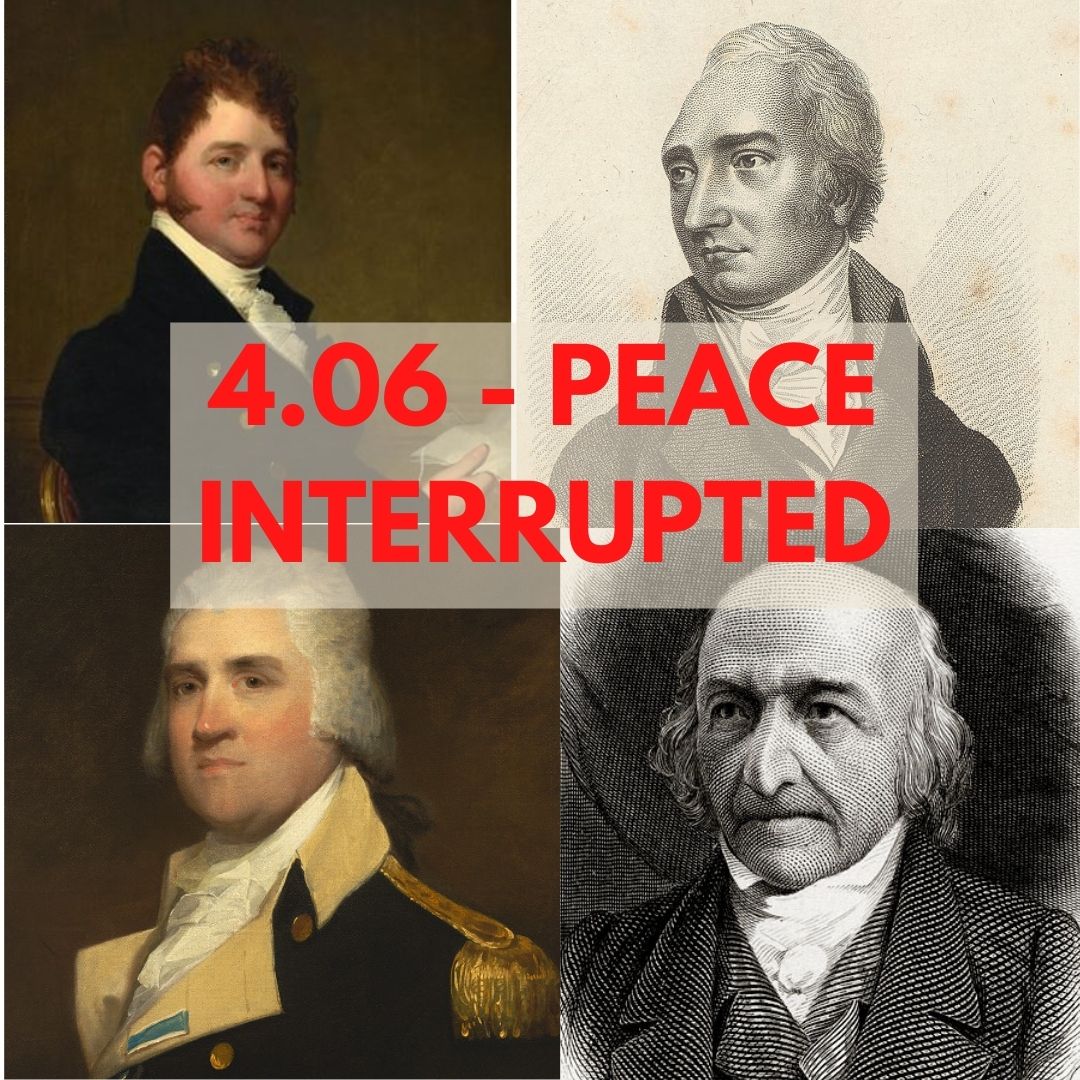 Year(s) Discussed: 1809 When the British government learned of the Erskine Agreement, it was not best pleased. In the summer of 1809, the Madison administration scrambled to deal with the ramifications of the British response while at the same time, two members of the Cabinet found themselves in opposition due to political infighting. Meanwhile, a similar row in the British ministry threatened to throw that government into turmoil. 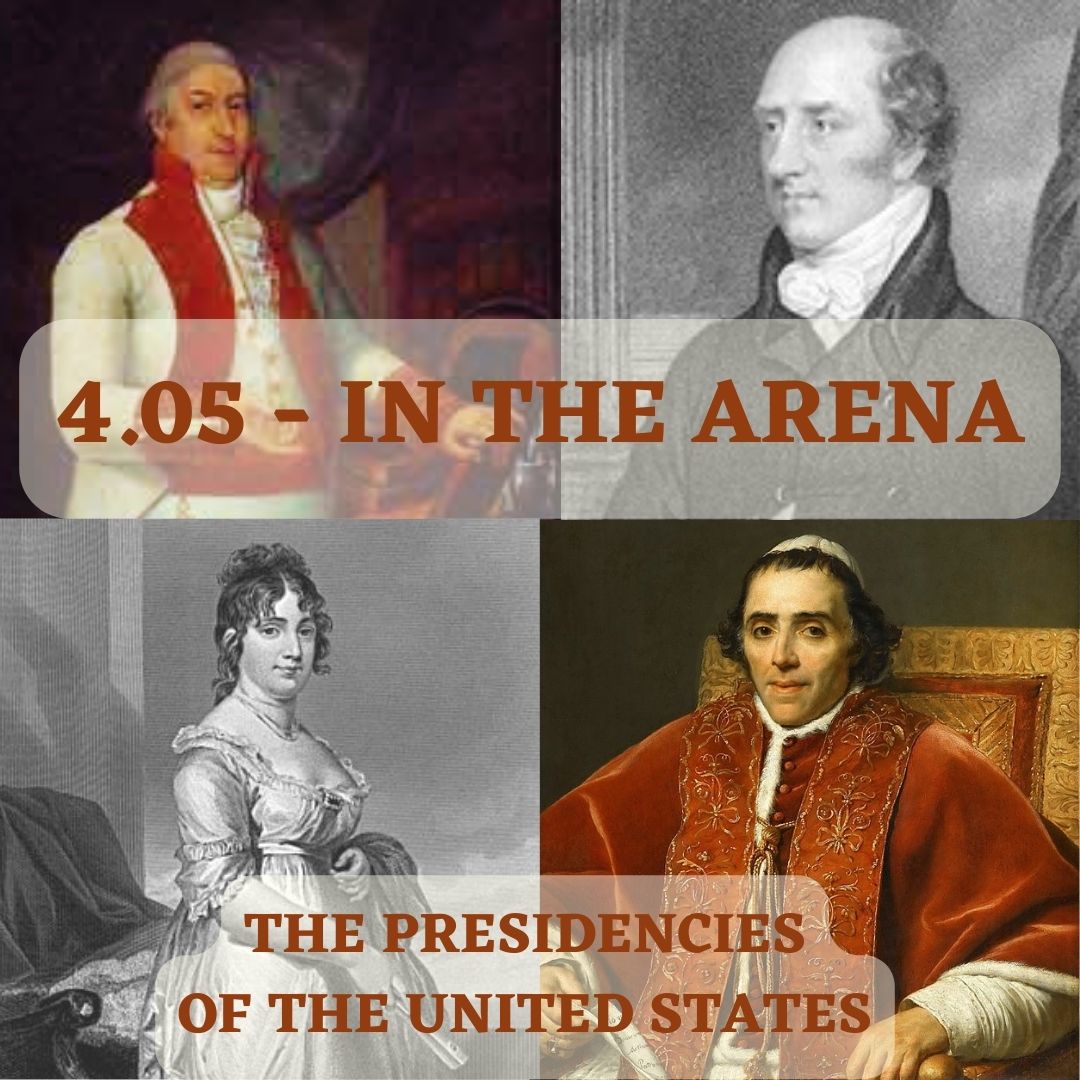 Year(s) Discussed: 1808-1809 A new congressional session provided an opportunity for the President and his wife to make their mark on the Washington political and social scene as they invited guests into the refurbished President’s House. Meanwhile, General James Wilkinson continued with his intrigues down in New Orleans, but rather than establishing a pseudo-dictatorship again, his affairs were more of a personal nature. Over in Europe, Austria rose up once more against the French Empire, and Napoleon had to scramble to avoid defeat. 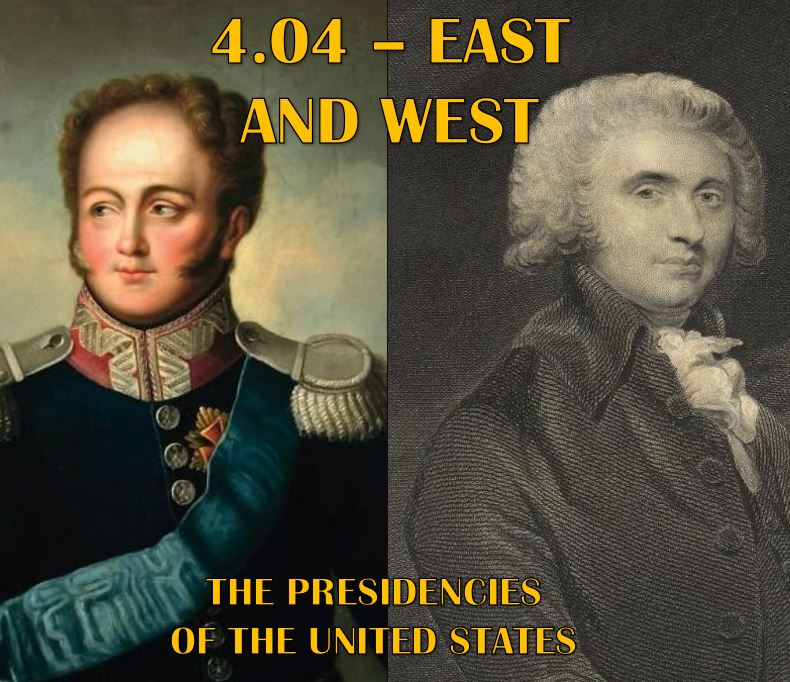 Year(s) Discussed: 1808-1809 In the first couple of months of his presidency, Madison not only dealt with a domestic political dispute but also managed to negotiate an agreement with the British Minister to the US to resolve issues with Great Britain. Unbeknownst to him, however, the continued instability in Europe would keep peace and prosperity just out of reach for his administration. 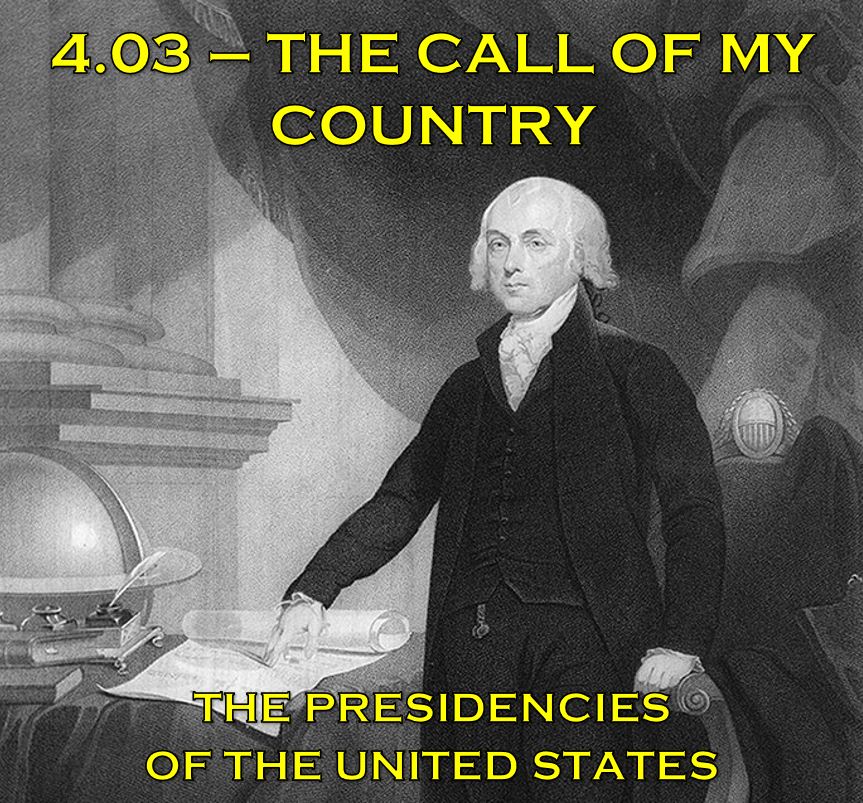 Year(s) Discussed: 1809 Though James Madison was seen as being Thomas Jefferson’s successor, it became clear starting with his inauguration that his presidency would be different from his predecessor’s, for better or worse. While the public got to see a more festive social tone as set by Dolley Madison, behind the scenes, the president struggled to get political support for a key Cabinet nomination. 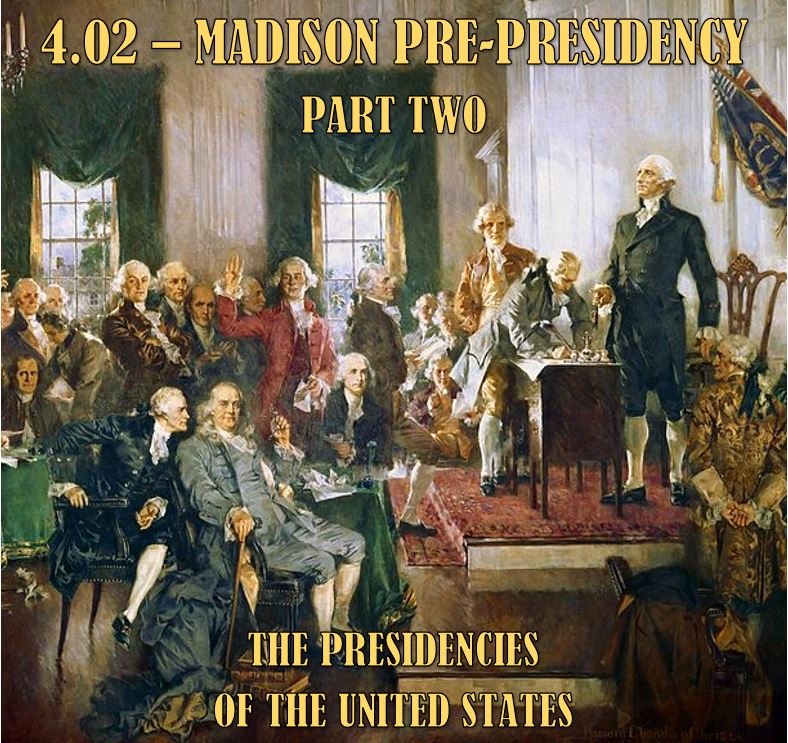 Year(s) Discussed: 1785-1809 After scoring some key political victories in Virginia, Madison decided to lead an effort to reform the government of the United States. However, he would find that getting the Constitutional Convention to agree on a new federal structure was only half the battle, and he would soon acquire some powerful enemies in the ratification campaign. 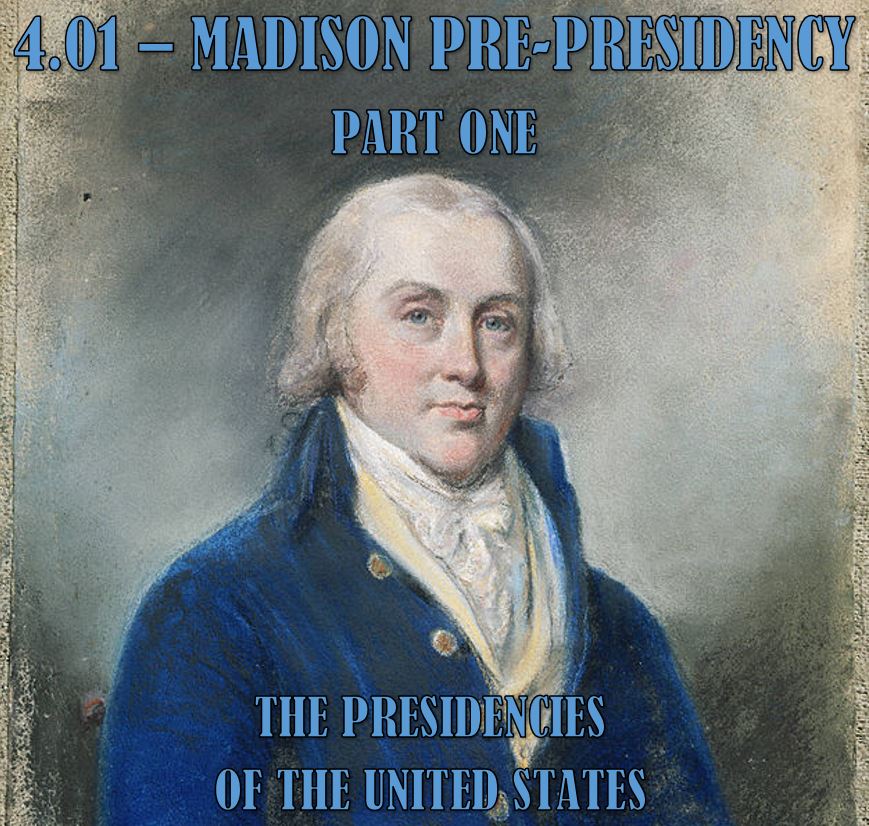 Year(s) Discussed: 1653-1785 As part of a family that had been on a steady rise in society since its earliest days in the Virginia colony, James Madison, Jr. was expected to do great things from the time of his birth, but his family could scarcely have imagined the heights to which he would rise. After an accelerated collegiate career and a few initial stumbles as a young man, Madison gradually worked his way into becoming a force in state and national politics. However, as someone not content with ignoring issues in the status quo, Madison would soon find his calling as a champion for innovation.