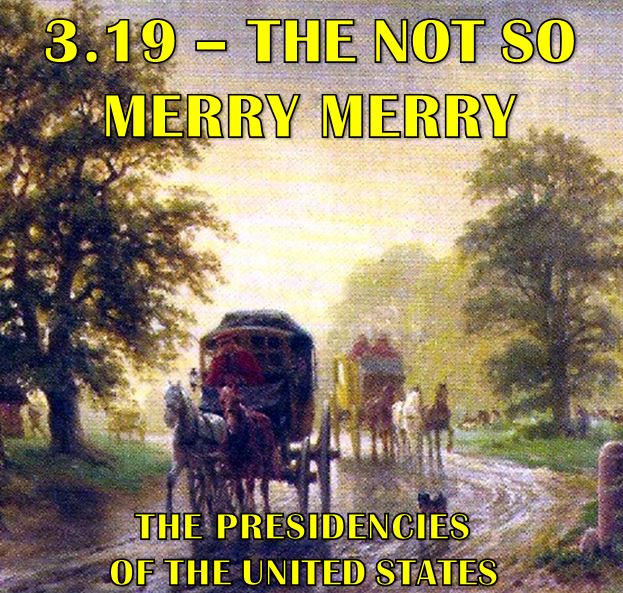 Year(s) Discussed: 1802-1803 The new British Minister to the US, Anthony Merry, arrived in Washington, DC in late 1803, and though his arrival was initially seen as a strengthening of British-American relations, it would soon prove to be quite the opposite. Meanwhile, the end of the year saw representatives of the Jefferson administration on both sides of the Atlantic assume new roles as well as Louisiana officially brought into the United States. 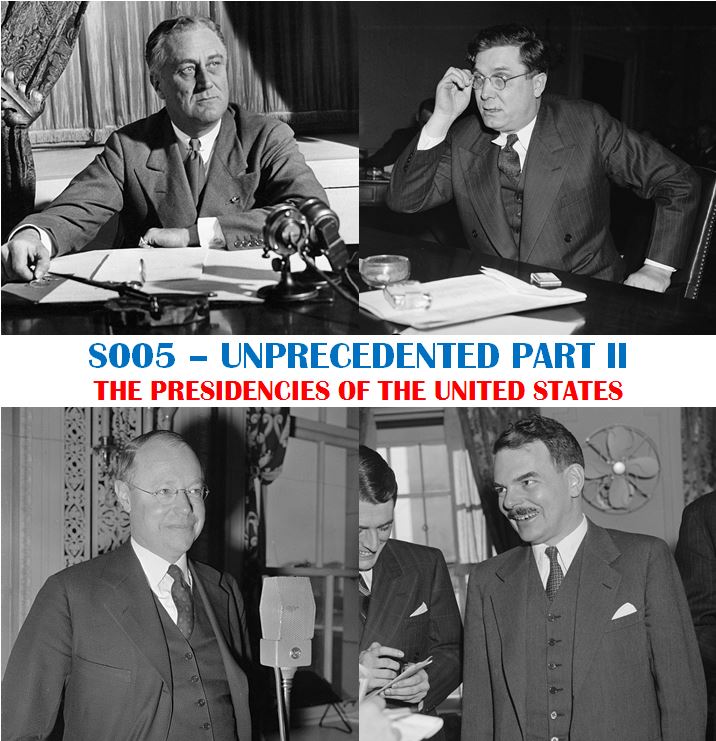 Year(s) Discussed: 1936-1944 With increasing uncertainty in the global situation and continued instability in the domestic economy, candidates lined up on both the Democratic and Republican sides to succeed Franklin Roosevelt at the end of his second term. However, 1940 found the President considering what was previously unthinkable: running for a third term of office. In this special episode, we explore this unprecedented election conducted under the looming threat of being drawn into a war waging abroad.

I will be presenting on the Rebellions of the Early Presidencies at the Intelligent Speech Conference on Saturday, June 27th, 2020. If you’d like to attend and hear from numerous educational podcasters and historians, be sure to go to www. 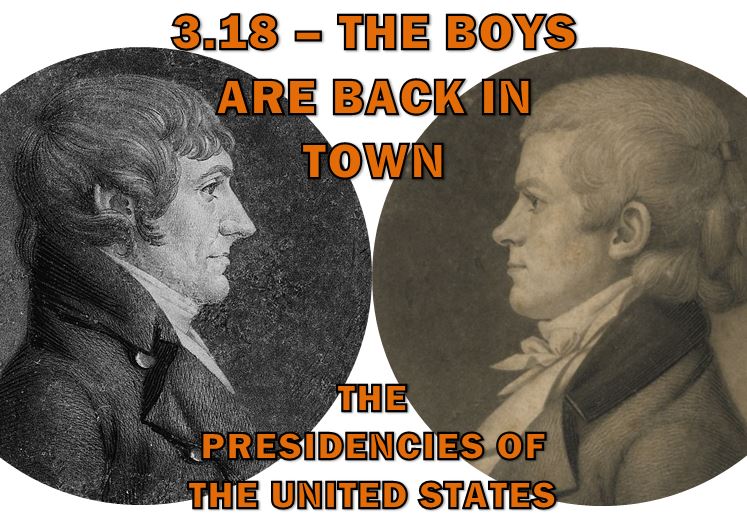 Year(s) Discussed: 1801-1803 Though the Louisiana Purchase Treaty had been concluded, President Jefferson understood that didn’t mean it was a done deal, and he and his administration got to work in the latter half of 1803 on getting the treaty ratified by the Senate and in pushing through legislation to carry through the purchase. However, they also had to contend with increased criticism in the press and with a gnawing concern in many minds, including that of the President, that there was nothing in the Constitution that said the United States could in fact acquire new territory. 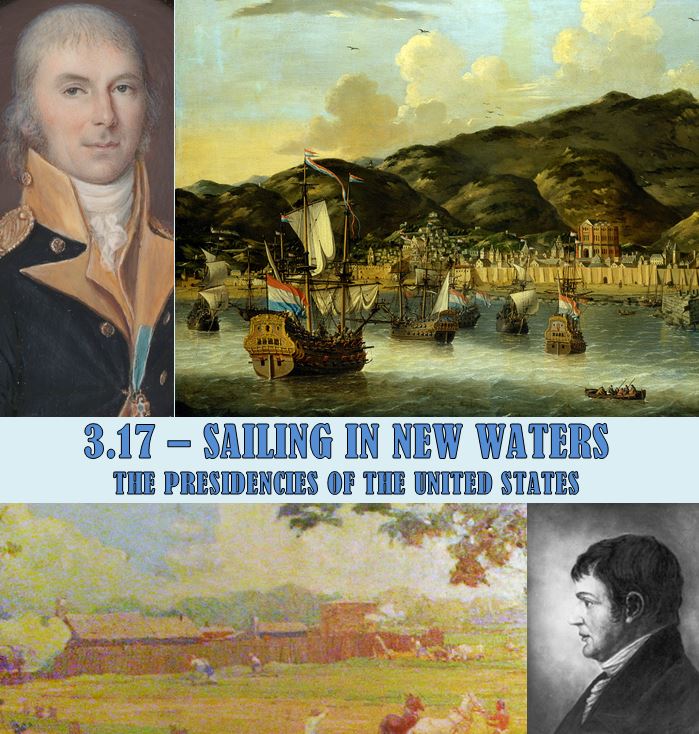 Year(s) Discussed: 1802-1803 Despite some early successes, the US naval efforts against Tripoli languished in 1802 and early 1803, and with the cost of maintaining a squadron in the Mediterranean climbing, President Jefferson and his administration had to consider alternates in both leadership and approaches to tackle the situation. Meanwhile, various young men in Jefferson’s life moved into new roles in 1803, and the President’s personal and political realms began to overlap in new ways. 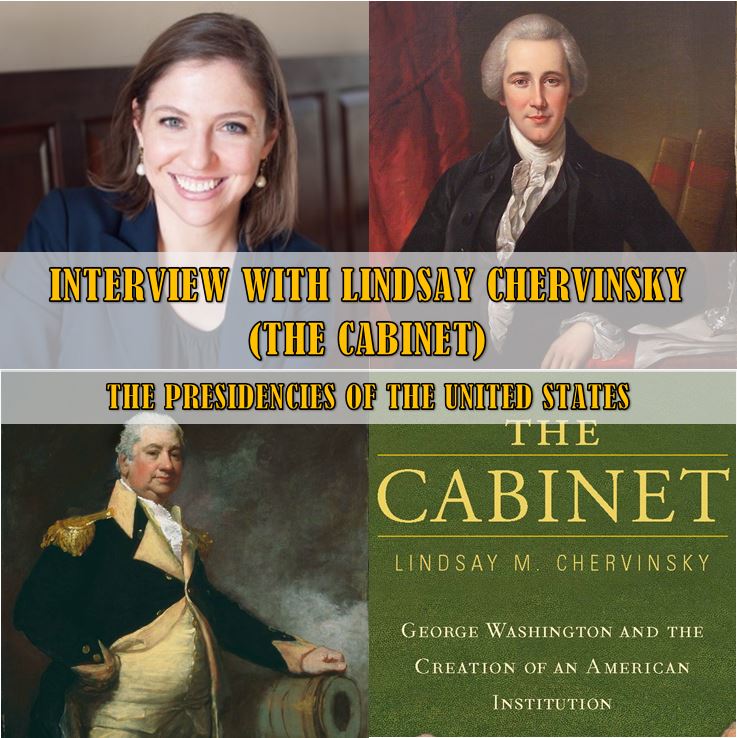 Year(s) Discussed: 1789-1809 George Washington established many precedents during his tenure of office, but one that had arguably the greatest impact was his establishment, not by law but by practice, of what we now know of as the Cabinet. 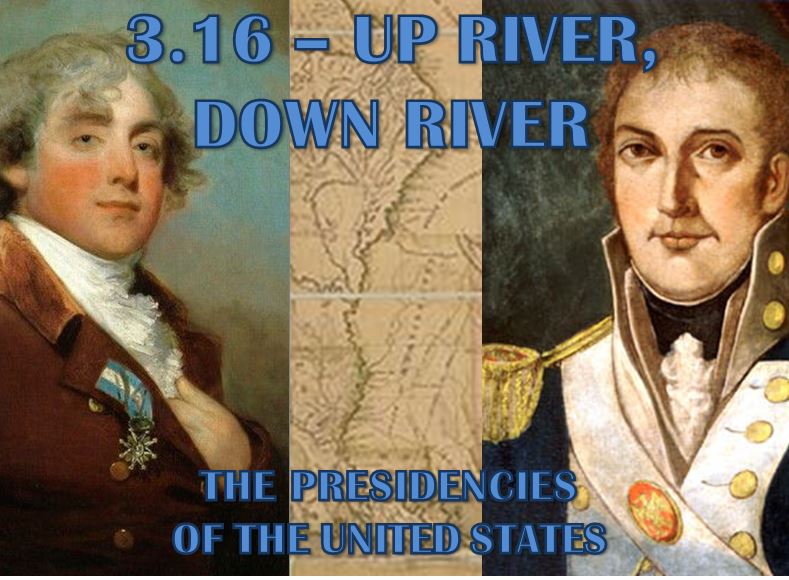 Content Note: This episode mentions the topic of suicide. Year(s) Discussed: 1802-1803 As the Jefferson administration awaited word on the outcome of Monroe’s mission to France, the territorial governors and government agents in the western US dealt with various issues including labor shortages, troubled relations with neighboring indigenous nations, and the economic chaos caused by the port of New Orleans being closed to American shipping. To the east, the President and his Cabinet worked with Meriwether Lewis to prepare him for the planned transcontinental expedition as news came from across the Atlantic that would reshape the United States forever. 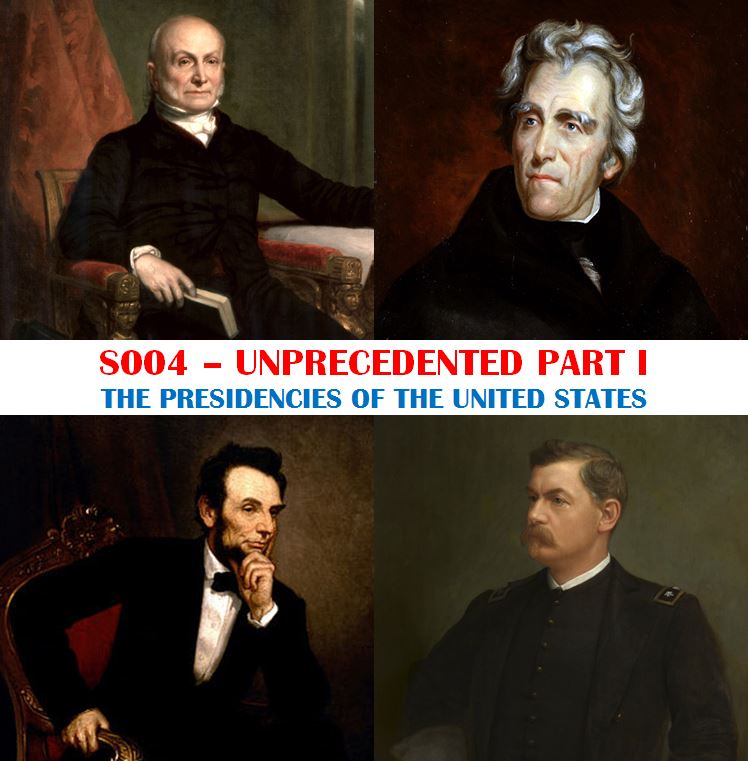 Year(s) Discussed: 1800-1801, 1816-1825, 1860-1864 While some presidential elections function in much the same way as others of the time, there are those select few that reshape the process or are noteworthy for being unique in some way. In the next two episodes of the special series, I will be examining four presidential elections that stand out to me as unprecedented. In this episode, I start with the election of 1824 which saw a four way match up between Secretary of State John Adams, Secretary of the Treasury William Crawford, Speaker of the House Henry Clay, and Senator Andrew Jackson. The remainder of the episode is devoted to the election of 1864 which saw President Abraham Lincoln running for reelection against his challenger, General George McClellan. 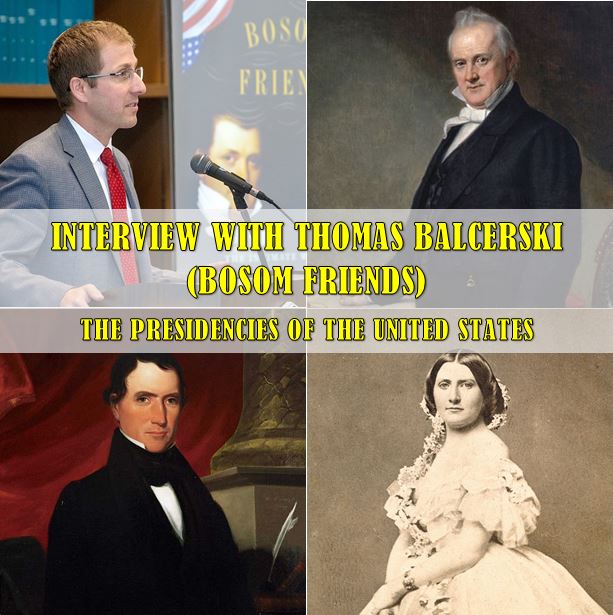 Year(s) Discussed: 1786-1868 Political partnerships are nothing new to American politics, but what happens when the domestic world and the political realm overlap? To examine that question and learn more about one of the most significant political part... 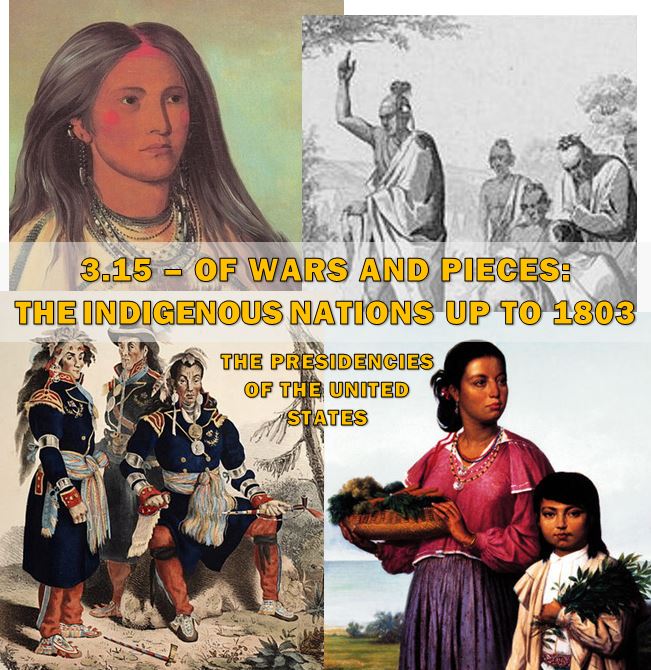 Content Note: This episode discusses the epidemics that spread through indigenous populations in the Americas upon the increased and sustained contact with Europeans starting at the end of the 15th century. Year(s) Discussed: approx. 9000 BCE-1803 Over the course of millennia, the peoples of the Americas developed rich cultures and prosperous nations that were often unique to one another as well as on the global stage. However, the course of these civilizations was forever changed as European explorers and settlers came from across the Atlantic in ever increasing numbers. In this episode, we’ll take some time to examine the indigenous nations present in what became the eastern and central portions of the United States leading up to the year 1803 and the Louisiana Purchase.

Year(s) Discussed: 1789-2020 The term “fit for office” is often bandied about when talking about the US presidency, but how exactly does physical fitness relate to the office or to presidential campaigning? To explore that question,

From Me to All of You: A Quick Note

With the current global situation, I wanted to send out a quick note to express that my thoughts are with all of you out there and to assure you that Presidencies will continue (including with a new special episode coming out on Sunday, March 22nd!). 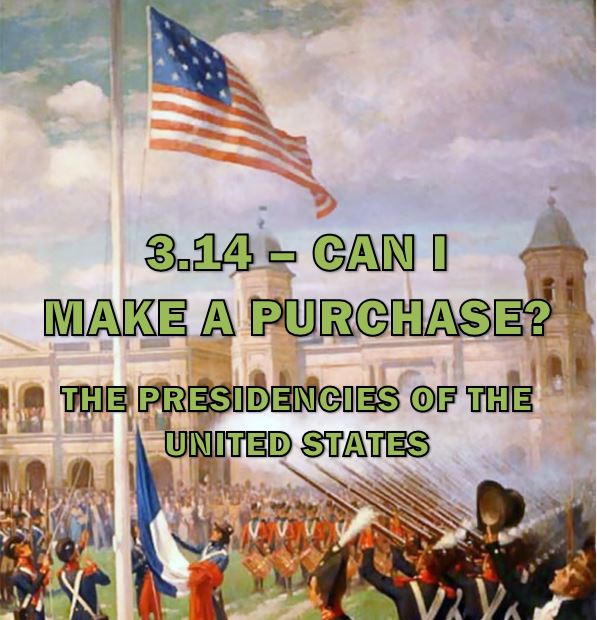 Year(s) Discussed: 1803 Despite US Minister to France Robert R Livingston’s best efforts to conclude a treaty with France on his own, the arrival of Special Envoy James Monroe in Paris marked the beginning of a new phase of negotiations which soon led to the acquisition of a large swath of territory for the United States, an event known today as the Louisiana Purchase. Though swift, the diplomatic back and forth in April 1803 proved to be precarious from the first proposal until the signatures were on the final document. 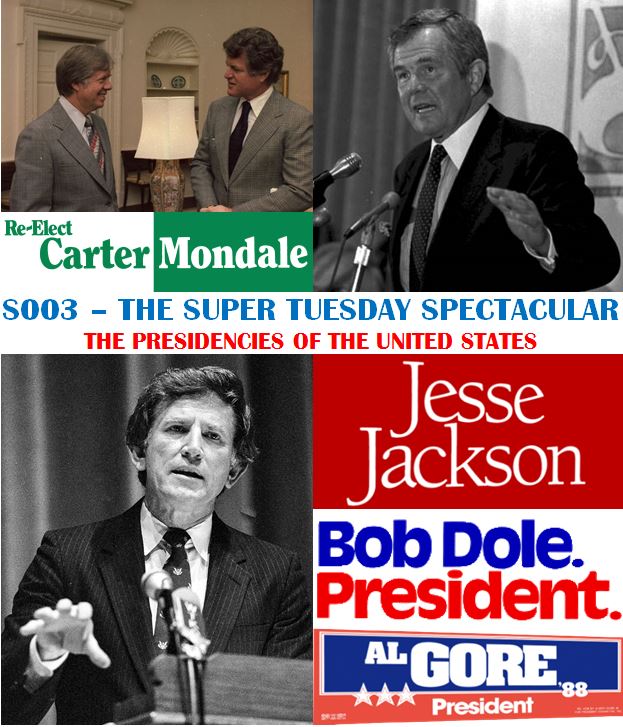 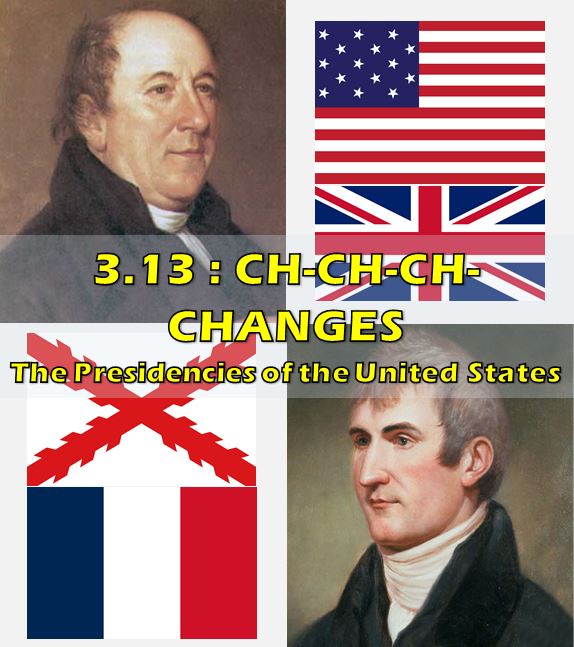 Year(s) Discussed: 1801-1803, 1807 As James Monroe began his special mission to Europe in early 1803, he would come to find that the situation on the continent was rapidly changing as the Peace of Amiens was proving to be a shaky one. Meanwhile, President Jefferson had to deal with some staffing changes at home and abroad. 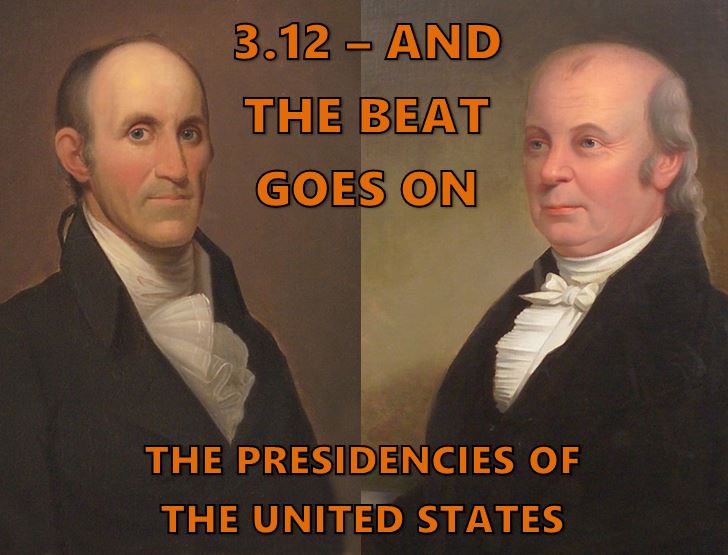 Year(s) Discussed: 1801-1803 As a new state joined the Union, state and federal leaders in the US worked to redefine the nation’s governmental institutions and its approach to foreign affairs. Jefferson put some plans into motion to stretch American influence through an expedition across western North America. Meanwhile, as Democratic-Republicans sought to wrest control of the judiciary from Federalists, the Supreme Court delivered a pivotal ruling. 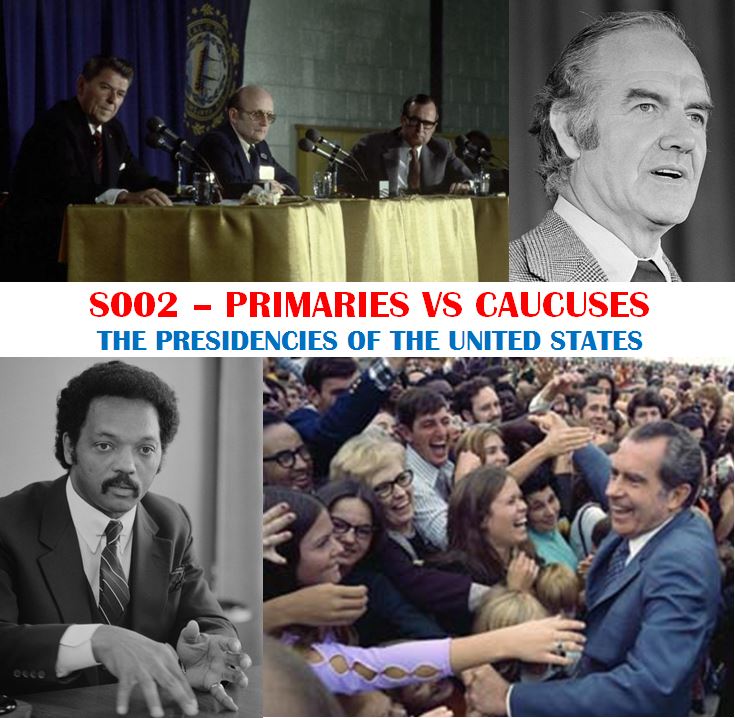 Year(s) Discussed: 1901-2008 What is the difference between a primary and a caucus anyway? Listen as I explore that question and discuss the various permutations of both as well as how the presidential primary calendar came to have Iowa and New Hampshire as the first contests in this episode. 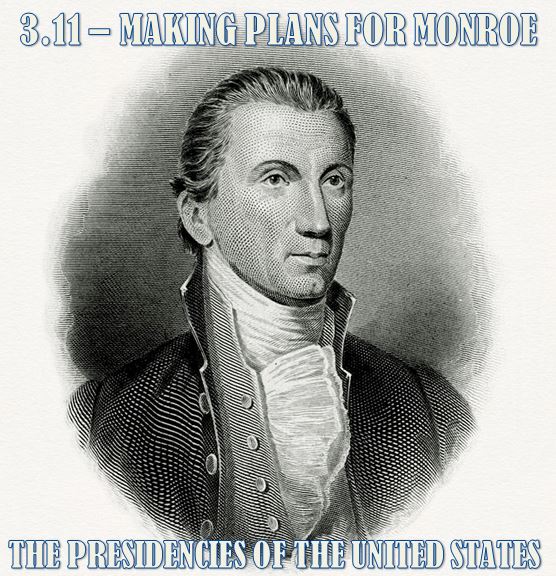 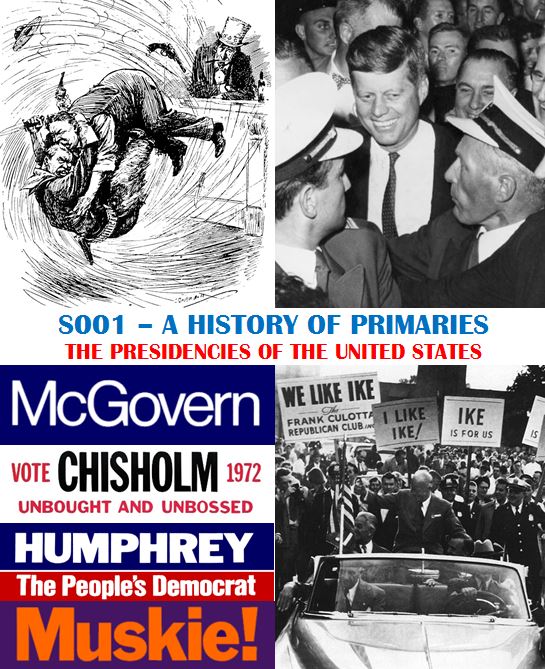 Year(s) Discussed: 1816-1976 Did you know that presidential primaries in the United States are a rather modern innovation and that for a long time, presidential primary winners often didn’t end up as the party’s nominee? Learn how the primary system came to be what it is today, the varying impacts it has had on presidential campaigns since its inception, and why it took so long to play a key role in choosing presidential nominees. 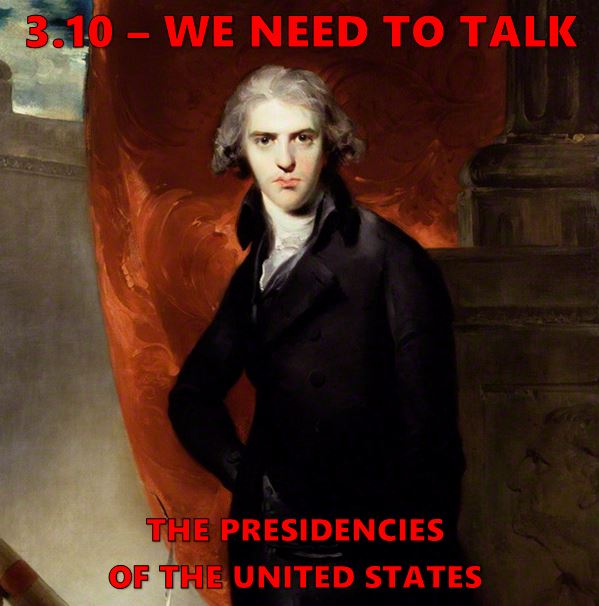 Year(s) Discussed: 1801-1803 As French First Consul Napoléon Bonaparte begins to shift the balance of power in the Western Hemisphere in his favor, President Jefferson works to counter these ambitions through diplomatic efforts in both Washington and Paris. Meanwhile, a Mediterranean power declares war on the US, and Jefferson’s powers of persuasion are put to the test when dealing with family matters. 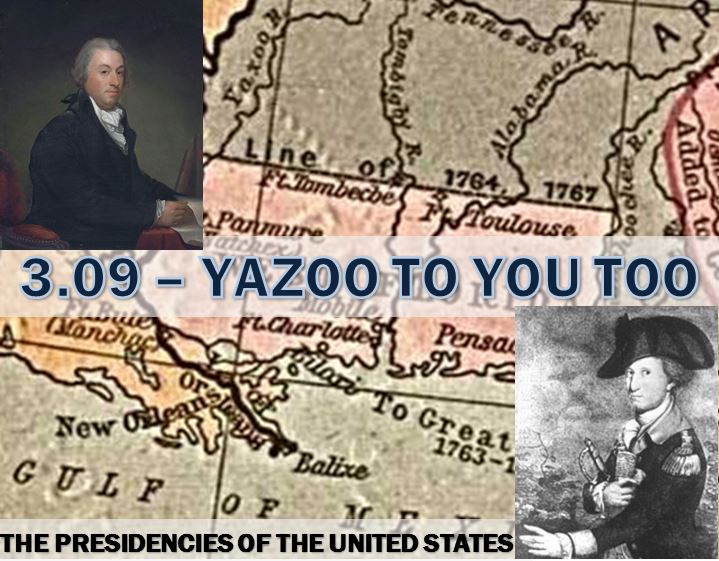 Year(s) Discussed: 1795-1802 While the Jefferson administration made a breakthrough in settling a long-standing dispute with the state of Georgia over its western land claims in 1802, the new US Minister to France, Robert Livingston, began his mission trying to get answers on the situation with the colony of Louisiana. Meanwhile, peace in Europe and a new phase of the conflict in Saint-Domingue threaten to upend Jefferson’s vision for the west. 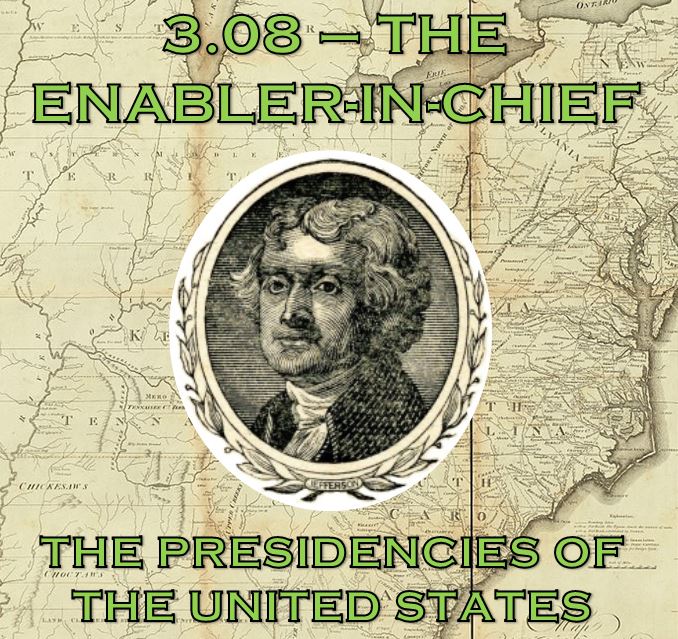 Year(s) Discussed: 1801-1802 The Democratic-Republican reform agenda moved beyond appointments as the Seventh Congress began its session. From the federal judiciary to the organization of the west, Jefferson wielded the soft power of the presidency in order to move ideas along. However, he would not be the only one working to shape the future of the government and the nation, and there was no guarantee as to whose vision would prevail. 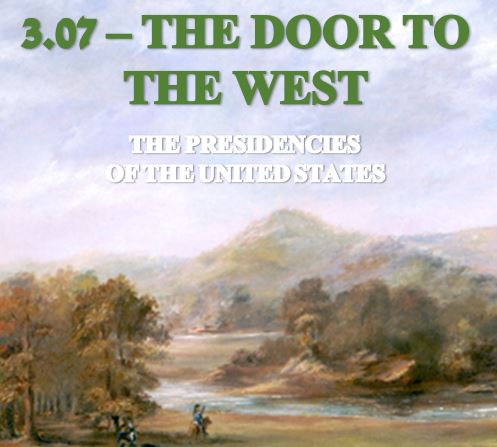 Year(s) Discussed: 1798-1801 Jefferson and his administration early on focused their attention on the civilian and military operations in the western frontier of the US and worked through the year leading up to the convening of the first session of the Seventh Congress to determine who would stay and who would go. Meanwhile, despite his concerns about a standing army and navy, Jefferson also worked in his first year in office to establish two key supports for the US military establishment: a military academy and a dry dock. 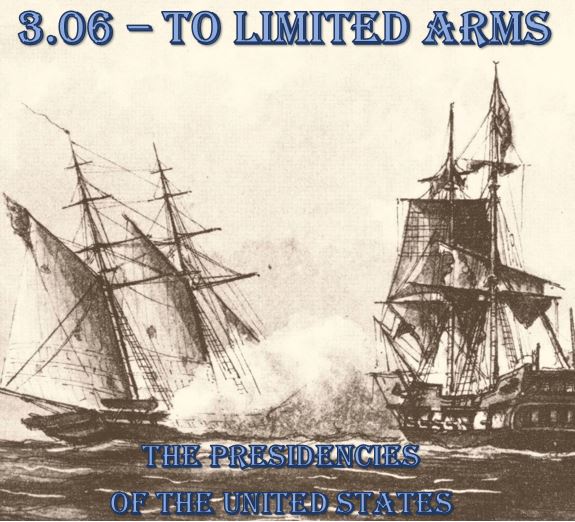 Year(s) Discussed: 1795-1801 Jefferson managed to get a permanent Secretary of the Navy just in time for Commodore Dale’s naval squadron to engage in combat in the Mediterranean. In addition to that key post being filled, the administration was able to make some additional structural decisions during the final months of 1801 in time for the new congressional session in December. Meanwhile, a new opposition was organized by a key Federalist leader to ensure that Jefferson’s first annual message would not go unquestioned.